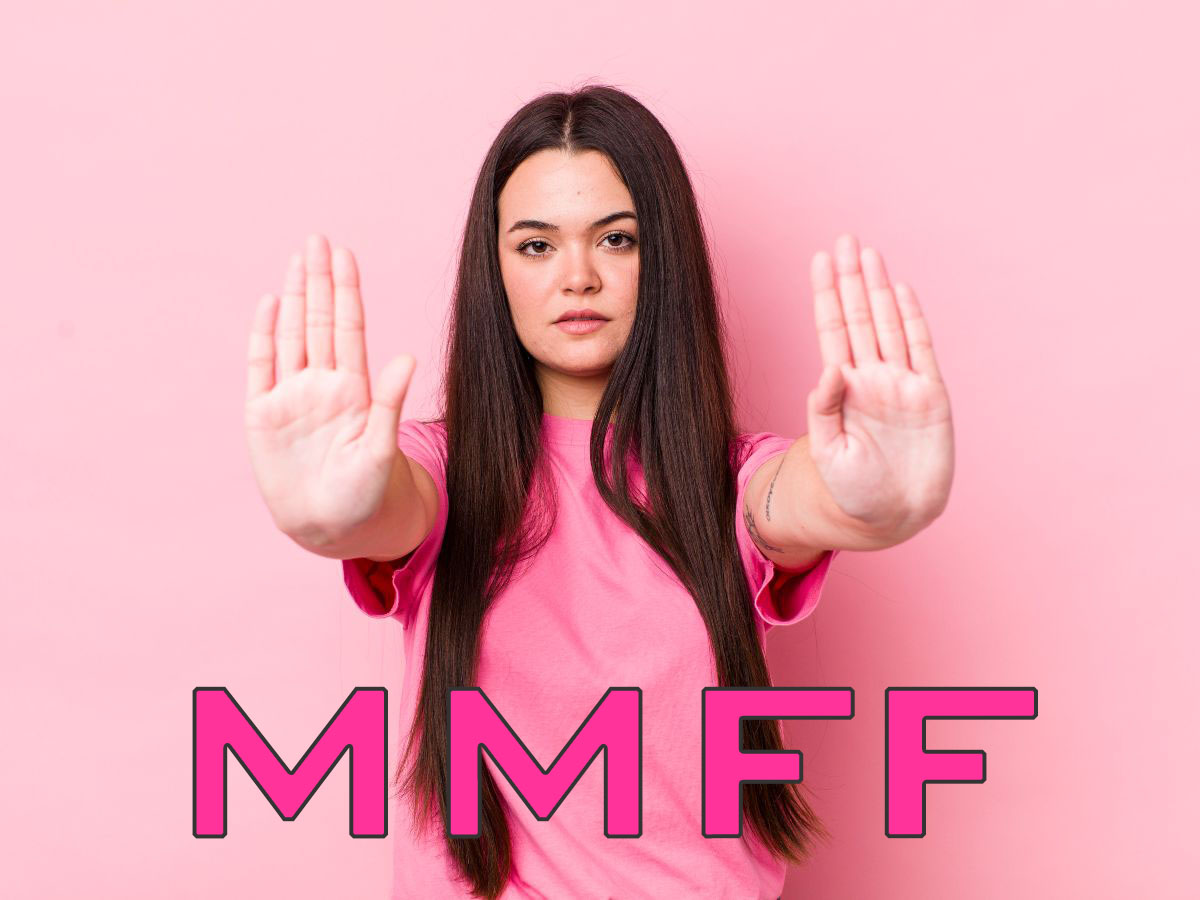 The Muriel McQueen Fergusson Foundation, also known as the MMFF, is dedicated to acting as a driving force for the reduction and eventual eradication of instances of violence committed inside families. It accomplishes this by fostering open dialogue, funding research into the various causes and manifestations of domestic abuse and providing financial support to organizations that offer assistance to those whose lives have been impacted by violence and abuse.

History of the MMFF

The Muriel McQueen Fergusson Foundation was named after one of the most admired and respected women in Canada — Muriel McQueen Fergusson. She was the first woman Senator from the Atlantic area and the first female Speaker of the Senate. She was born in 1899 in Shediac Cape, and became a lawyer long before women were acknowledged in that field. Senator Fergusson, who was recognized with a number of honorary degrees and accolades during her career, devoted her life to the zealous pursuit of social justice and unselfish public service. She passed away in 1997.

Fergusson advocated for more women to be involved in politics and battled for their rights to do so. In 1946, she petitioned for the right of all women in New Brunswick to vote in municipal elections, and she was successful in gaining that right. Not long after that, she launched a challenge to the policy that prevented women from running for Fredericton City Council. Due to the fact that no one else came up to seize the opportunity, McQueen Fergusson ran for the position of Alderman and won both times by acclamation. 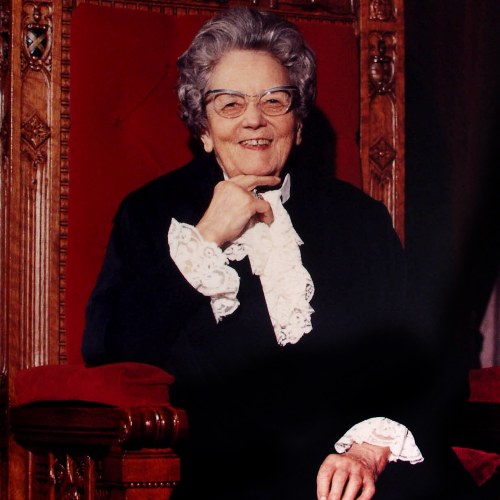 In addition, Fergusson fought for equal pay for women and children as well as the protection of their legal rights. She was a frequent speaker on the subjects of equal pay and wills at gatherings of women’s groups. She was able to achieve a role that was traditionally reserved for men by participating in letter-writing campaigns organized by a variety of women’s groups. As a result, she was appointed Director of Family Allowances.

During the course of her life, she volunteered for a wide variety of organizations, some of which focused on women and girls, such as the Girl Guides of Canada and other philanthropic organizations.

1985 marked the beginning of operations for the Foundation. The Foundation requested that the Honorable Muriel McQueen Fergusson accept an invitation to be Patron of the fledgling trust, and they received permission to adopt her name. This was done in recognition of her outstanding contribution over a long period of time in the field of social action and justice. A volunteer Board of Directors and an Executive Director are responsible for carrying out all of the work that needs to be done for the Foundation. This includes organizing projects and generating funds.

The Purpose of the Muriel McQueen Fergusson Foundation

The MMFF was founded with the purpose of raising funds and providing assistance to victims of domestic abuse by means of supporting refuges, initiatives, and educational programs.

The Muriel McQueen Fergusson Foundation funds research into the causes, incidence, and treatment options of family violence, and promotes and sponsors successful public education campaigns in order to combat the widespread ignorance that exists on the issue. It also helps shelters for people who have been abused by their family by providing funding for unique programs and activities that are not typically supported by the government.

The Muriel McQueen Fergusson Foundation has been active in a variety of other projects to increase awareness and comprehension of the issue’s complexities. These projects include:

The Muriel McQueen Fergusson Award was established in 1992 with the purpose of honoring individuals and organizations that had made significant contributions to the fight against family violence and its elimination.

The Fergusson Foundation was established in 1985. During the time when members of the Foundation were working to gather money for protective services for victims, it became abundantly evident that a proactive approach was required in order to avoid the recurrence of family violence. The realization that it was necessary to take preventative measures gave rise to the concept of establishing a research center devoted to the joint investigation of these problems.

The Fergusson Foundation decided to support the activities of the research center by establishing an endowment fund with a total value of $2.5 million. 1987 marked the beginning of allocating money drawn from the endowment. The establishment of the MMFC as part of the Faculty of Arts was the subject of both a proposal that was delivered to the University of New Brunswick in 1989 and a motion that was voted on and approved by the Arts Faculty Council in March 1990.

Following that, the University of New Brunswick and the Foundation collaborated in order to present a financing request to the federal government. One of five such proposals that were accepted to build centers across Canada was the one to support a Research Centre on Family Violence at the University of New Brunswick (UNB). The Social Sciences and Humanities Research Council (SSHRC) and Health Canada provided each center with a grant of one hundred thousand dollars every year for a period of five years. In addition, the Provincial Department of Health and Community Services has agreed to provide the Muriel McQueen Fergusson Centre with a funding award of $25,000 per year for the next five years.

There are now several research centers located in Canada. They are as follows:

1992 was the year that officially marked the beginning of the Fergusson Foundation Grants Program. The program offers monetary contributions to Canadian Registered Charities that have their headquarters in Atlantic Canada and provide services to residents in that region. The following causes qualify as eligible for funding from the Foundation if their initiative coincides with one or more of the Foundation’s three pillars:

The organizations chosen to receive grants each receive up to $10,000. The projects must have a real-world application and have an effect on individuals who are impacted by family violence, which may include victims, survivors, perpetrators, and/or the victims’ and perpetrators’ families and communities.

Although a large number of people are familiar with the term “family violence,” the term is frequently accompanied with a reluctance on the part of society to embrace the term as a contemporary scenario for individuals who come from a variety of diverse backgrounds. The prevalent perception that family violence only affects a tiny portion of the general population contributes to the widespread acceptance of the fallacy that it is not a widespread problem. As a result, it is frequently ignored.

It is a prevalent misconception that persons of low socioeconomic position, for example, are the only ones who have ever experienced family violence. This is not the case, despite the prevalence of this myth. Family abuse does not discriminate in terms of whom it targets, and it exacts a significant toll on society as a whole.

Although both classifications share some features in common, the manner in which the violence was carried out, the results of it, and its long-term ramifications are very different. Both domestic violence and intimate partner violence have their roots in unequal power dynamics within relationships, specifically those in which one partner makes an effort to gain and maintain control over the other by abusing them on an emotional, psychological, sexual, financial, or spiritual level.

The most difficult kinds of abuse to recover from are those that affect a person’s mind, spirit, and emotions. There does not have to be a physical altercation for violence to occur; rather, it may take the shape of a threat. 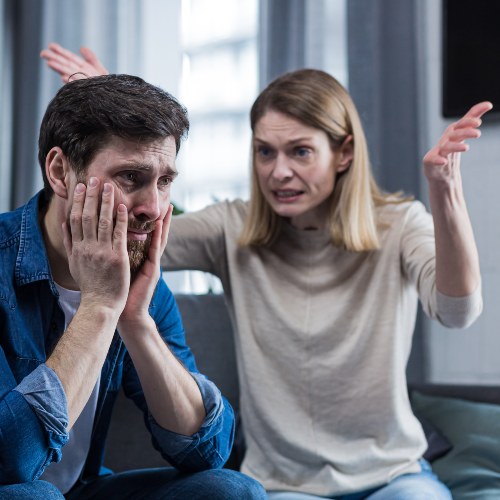 Intimate partner violence (IPV) refers to abusive behavior between two people who are romantically involved, whereas domestic violence (DV) refers to abusive behavior between any two people, including siblings, roommates, pets, or parents and children. Survivors of domestic violence frequently report that their experiences have left them with a sense of shame toward their families, ethnicities, and religious communities.

Statistics on Domestic Abuse in Canada

It may come as a surprise to learn that a nation with a reputation for having peaceful values, such as Canada, can have such high rates of intimate partner violence.

In 2019, there were around 360,000 people in Canada who were victims of violence according to police reports. Of these victims, thirty percent were victimized by an intimate partner. This percentage represents three out of every ten victims.

Most cases of intimate partner violence (36%) that were reported to the police were carried out by a current partner, such as a boyfriend or girlfriend or a spouse. In other cases, the perpetrator was a former partner (21%). The fact that these victims and accused were not living together likely explains why former partners, such as an ex-boyfriend or ex-girlfriend or an ex-spouse, were less common.

Within Atlantic Canada, New Brunswick has some of the highest rates of domestic violence and the highest rate of murder-suicide related with domestic homicide. These are some of the worst rates in the country. In Canada, a woman is murdered around once every two and a half days; more than eighty percent of the time, the victim’s intimate partner is the person who commits the murder.

It comes as a surprise to learn that many people have a habit of underestimating the risk of domestic violence. These puzzling figures are due, in part, to the study that is currently being carried out at the Muriel McQueen Fergusson Centre for Family Violence Research at the University of New Brunswick.